Sometimes a “loser” is not simply a loser.

Consider yesterday’s Super Bowl ads, both in terms of commercial reception and the longer-lasting implications for each contributing company.

What does this mean for the morning after, and what of the longer-term consequences of these advertisements?

As to be expected, Cognovi Labs’ Emotion AI saw considerable increases in conversation for both companies vis-à-vis their ads. Of particular significance, however, is the emotional profile that remained. The company’s Intent score, or the level of emotional activation toward the brand, showed a low of 6% for Rocket Homes preceding the Super Bowl, an increase to 34% on Super Bowl Sunday, and a decline to 7% by 7 pm today.

As for Coinbase, the company’s Intent score followed a reverse trend: social media conversations revealed an Intent of 42% leading up to the big event, a plummet to 20% upon airing its Super Bowl commercial, and a recovery so far today at 49% with a full emotional range and striking motivation toward the brand.

While Rocket Homes won the hearts of fans with its commercial during the Super Bowl, Coinbase is captivating the audience on multiple levels today, eliciting the emotional diversity of Joy, Anger, Sadness, Surprise, Amusement, Contempt, Hope and Trust. We remain engaged, invested and emotionally involved – even after the conclusion of the much-anticipated game.

And, given that, we are looking at two Super Bowl winners.

Dr. Amit Sheth is an educator, professor, researcher and entrepreneur. He is the Founding Director of the Artificial Intelligence Institute at the University of South Carolina and Professor of its Computer Science & Engineering Department. Prior, Dr. Sheth was the Ohio Eminent Scholar and the Executive Director of the Kno.e.sis Center at Wright State University in Dayton, Ohio.

Dr. Sheth’s research has led to several commercial products and three start-ups based on licensing of his university research, including Cognovi Labs’ initial AI platform.

Iggy Ioppe has a 20+ year successful track record as a builder of tech companies and investment funds. He was a founder and CEO of Wavemarket/Location Labs – a mobile cloud security company – acquired for $220m cash.

Location Labs has 50m+ users, $200m+ gross revenue, and continues to grow. Most recently, Iggy was a founding partner at Sureview Capital, a TMT long-short equity hedge fund. Sureview secured a strategic investment from Blackstone Group and raised close to $0.5B from global institutions.

Prior to Sureview, he was with Global Proprietary Trading at Credit Suisse. He managed teams of portfolio managers and analysts in U.S. and Asia. Previously, Iggy worked for the legendary investor Jeff Vinik at his $5B+ hedge fund. Iggy also worked at Bain Capital in private equity.

He is a co-author of three U.S. patents on software algorithms.

AJ is a seasoned business leader and startup executive with 24 years’ experience in scaling enterprise software organizations in FinTech, Government, Insurance and Fortune 500 Firms. AJ graduated from Lehigh University in 1995 and began his first FinTech sales position with Thomson Financial.

He gained quick success in the market data space and joined select colleagues in his first startup career move at Lionshares, Inc.; a technology disrupter within the market data industry. This proved to be a successful move, with an acquisition by FactSet within 2 years. AJ then joined Eze Castle Software, a Boston-based trading technology startup.

He joined the firm as one of their first employees and demonstrated great success in creating and scaling both their domestic and global sales, sales operations, marketing, account management and customer success organizations.

Additionally, AJ serves on the advisory board of two startup companies: MapD Technologies, an early-stage San Francisco based technology company focused on database and visualization applications, and Cognovi Labs, an early innovator in the field of Emotion AI based in New York City. 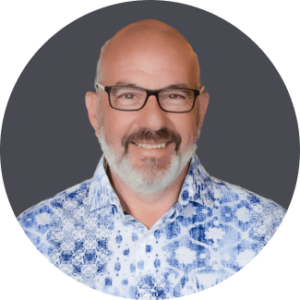 Jeff Hoffman is an award-winning global entrepreneur, proven CEO, worldwide motivational speaker, bestselling author, Hollywood film producer, a producer of a Grammy Award winning jazz album, and executive producer of an Emmy Award winning television show. In his career, he has been the founder of multiple startups, he has been the CEO of both public and private companies, and he has served as a senior executive in many capacities. Jeff has been part of a number of well-known successful startups, including Priceline.com/Booking.com, uBid.com and more.

Jeff is the CEO of Driving Force Enterprises, a strategic consulting firm that teaches exponential growth to business owners and entrepreneurs, as well as teaching innovation strategies to corporations and governments worldwide. Jeff serves on the boards of companies in the US, Europe, the Middle East, South America, Africa, and Asia. He supports entrepreneurs and small businesses on a worldwide basis. He is the Chairman of the Global Entrepreneurship Network, which works with entrepreneurs in 180 countries, as well as being a founding board member of The Unreasonable Group, whose startup companies have operations in 185 countries and have raised over $4 billion in funding. He is also the Global Chairman of Dream Tank, a worldwide youth problem solving network. Jeff supports the White House, the State Department, the United Nations, and similar organizations internationally on economic growth initiatives and entrepreneurship programs.

Jeff is a frequent keynote speaker, having been invited to speak in over 60 countries. He speaks on the topics of innovation, entrepreneurship, and business leadership, and is the author of the book SCALE, a how-to guide for growing your business. Jeff also teaches innovation workshops to major corporations on a regular basis.

Outside of the world of technology, Jeff has produced TV shows, has produced movies in Hollywood, has produced musical events including concerts, tours, and charity events with such artists as Elton John, Britney Spears, NSYNC, Boyz II Men, and others, and serves on numerous charity and non-profit boards.

Colin is the Global Revenue Officer at Cognovi Labs.

He spent his 16 year career in business development at two entrepreneurial firms, both of which he joined close to inception. He worked closely with the principals to build their companies from seed to mature stage.

The first venture was Caris & Company, an investment bank. Caris was acquired by B. Riley Financial where Colin continued in a senior role. The second venture was Somar Capital, a data-intensive fundamental hedge fund.

At both companies, he cultivated multi-year client relationships across multiple industries. He structured distribution deals, and managed pipelines with dozens of current customers and hundreds of partners.

Colin is excited to combine his passions for technology, finance and behavioral psychology by introducing clients to Cognovi’s revolutionary machine learning software.

Colin received his B.A. in Economics from the University of Washington.

While the Assistant Controller at Freddie Mac, Jim published an influential article on market value accounting in the Journal of Accountancy, which subsequently led to changes by the FASB in the way balance sheet accounting is treated.

As COO of CitiAuto, Jim helped double annual earnings to $235M by increasing sales and reducing losses on auto loans.

Beni Gradwohl is the Co-Founder and CEO of Cognovi Labs. Beni is a senior finance executive, institutional investor and fintech innovator. By combining an analytical discipline with keen business acumen, he has successfully transformed or created new businesses that spanned the consumer finance, institutional securities and investment management disciplines.

Before pivoting into business innovation and fintech, Beni was an EVP at Citi, where he helped stabilize the firm’s residential mortgage business during the financial crisis. Among various responsibilities, he oversaw the company’s $280B mortgage portfolio, the organization’s analytics functions and the development of a new digital acquisition channel. Prior to Citi, Beni was a Managing Director in Institutional Securities at Morgan Stanley and an award-winning Portfolio Manager at investment management firms.

Beni currently serves as an advisor to start-ups and has been invited to several Boards of Directors. In addition to his corporate career, Beni previously held research and teaching assignments at multiple leading academic institutions.

Beni received his Ph.D. and M.S. in Physics, and B.S. in Mathematics and Physics from The Hebrew University of Jerusalem, Israel.

Jeremy is responsible for the front-end development of Cognovi Labs’ SaaS platform.

He created the suite of APIs and many of the specialized components of Cognovi’s social media technology – including spam filtration, entity extraction and location identification.

During his tenure as a Software Engineer at the Kno.e.sis Center at Wright State University, Jeremy was involved in several leading-edge projects including the creation of a social media-based tool for Emergency Response risk management and a mashup that uses social media streams to validate review sites and generate movie suggestions.

Jeremy, a student and Intern Advisor at the Kno.e.sis Center, received his BS, Computer Science at Wright State University.

Zach currently serves as the Managing Director of Federal at Cognovi Labs. Prior to joining Cognovi Labs, Zach spent a few years between DXC Technology and Enlighten (EITC) where he focused on identifying client capability gaps and leading strategic sales to meet the demands of the mission-critical technology and services ecosystems.

Before pivoting to the private sector, Zach served in the US Army and Joint organizations with distinction in various special operations forces across the Dept of Defense and Intelligence Community.

His education includes a MA of International Service from American University, MBA from the University of Phoenix, and a Double BA in Sociology and Political Science from Ohio University.

A licensed psychologist, Nirit has spent the past 15 years studying human emotions and behavior through the lens of clinical and developmental psychology.

Nirit fulfilled her clinical training at Bellevue Hospital, Jacobi Medical Center, and Bronx Psychiatric Center, and completed a Postdoctoral Fellowship at Pace University’s Counseling Center. She currently works in private practice with a psychoanalytic lens and a specialization in trauma.

Nirit has published a book on intergenerational Holocaust trauma as well as a number of related chapters in edited psychological volumes. She has presented her research at interdisciplinary conferences in the United States and abroad.

Alan currently manages all architectural developments of Cognovi Labs’ systems platform and has been involved with the underlying technology since its early days of development.

Alan began his career as a Web Application Developer at Profound Logic and completed a four-month internship at IBM Almaden Research Center in Silicon Valley.

These publications describe methods and applications for applying semantic web techniques to a multitude of use cases – including biomedical knowledge exploration and drug abuse epidemiology using social media data. Alan earned his MS and BS in Computer Science from Wright State University.

Prior to joining Cognovi, Oded was an investment banker and financial advisor in one of Israel’s largest Investment Banks, responsible for business valuations, M&A and capital issuance.

He was also a financial analyst in an Israeli hedge fund, responsible for identifying value investments, and constructing systematic investment strategies. After moving to the US in 2016, Oded joined an early-stage startup in the real-estate information technology space as a data analyst.

Prior to the above, Oded served in the IDF’s unit 8200 as the operations officer, responsible for mission execution and leading the command room.

Oded holds a BA from Tel Aviv University with a double major in Accounting and Economics and a MA in Statistics with a Data Science track from Columbia University.

Mike is a software engineer at Cognovi Labs with a specific focus on machine learning systems development and classifier production.

He worked as a Graduate Research Assistant at Kno.e.sis Center at Wright State University studying application and integration of deep learning solutions centered around both textual and image-based data.